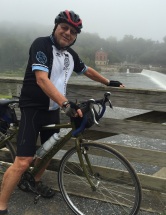 Don is a retired Civil and Geotechnical Engineer with over 50 years of experience in Marin County. He is an advocate for safe bicycle and pedestrian paths and facilities for over 30 years and was an early member of the Bay Area Ridge Trail Council (BARTC) Board of Directors and Executive Committee. Don has worked on the Alto Tunnel Project for almost 30 years and served as the Leader of The Friends of Alto Tunnel (FOAT) for many years.

“I want the Alto Tunnel reopened because it is the only possible safe and accessible non-motorized route suitable for users or all ages and abilities.  The Tunnel will eliminate over 2000 vehicle trips a day and will serve over two million users a year for generations to come at a capital cost of less than 25 cents per user.  Reopening the Tunnel is the most cost-efficient way to reduce traffic, reduce greenhouse gases, improve recreation opportunities, provide a safe route to after school activities, connect our non- motorized transportation network, protect the adjacent homes and improvements from ongoing collapse, and to generally improve the quality of life.  Imagine the outcry that would occur if tunnel were open now and someone proposed closing it.”

Jim had a 40-year career in accounting and finance in the Bay Area and currently serves on the boards of public and private businesses.  He has been involved in the project to open the Alto Tunnel for over 20 years.

Jim and his wife lived in Mill Valley for over 40 years and now live in Larkspur.  They cycle for recreation and for just getting around Southern Marin.  They have young grandsons in Corte Madera and Mill Valley and enjoy cycling with the whole family.

“I have dreamed for years (and years) about being able to use bike and pedestrian paths to get all around Marin and especially all around Southern Marin and opening the Alto Tunnel is the last (and in some ways the most important) gap in the needed infrastructure.”

Lee was born in the Pacific Northwest and grew up riding a bike, swimming, skiing, hiking and sailing.  In 1983, she moved to Mill Valley, married and raised two sons.  Lee is a founding member of the San Francisco Bay Area National Association of Professional Organizers and has served on their advisory board.  During 19 years of volunteering in Marin County schools, Lee saw Safe Routes to School significantly improve community crosswalks, sidewalks and paths to get more and more students safely to school by bike or on foot. Lee has been involved in leadership roles advocating for the Alto Tunnel since 2006.

“When I discovered that the old Alto Tunnel existed, I was inspired to help reopen this valuable community asset which will fill a critical gap to complete construction of Marin County’s North-South Greenway.  Studies show that reopening the tunnel and completing the Greenway will reduce traffic and get more people out to walk and ride than ever before.  When the Greenway is fully interconnected, people will have the freedom to decide whether to bike, walk or drive their cars to get around Marin County.  Reopen Alto Tunnel and finish building Marin’s North-South Greenway–it is vital for our community and for generations to come!”

Doug has been involved with the Alto Tunnel effort for most of the 25 years he has lived in Mill Valley.

He is a landscape architect working mostly on national park and historic landscape projects.  He also spent 6 years on the Mill Valley Parks & Recreation Commission.

“As a life-long bicyclist and daily bike commuter re-opening Alto Tunnel just makes pure sense – connecting the north and south portions of Marin’s North-South Greenway.  The tunnel is an untapped public resource that needs to be open for the common good.”

Paris is a 5th generation Mill Valley resident living in the Horse Hill neighborhood with her partner and dog. She grew up exploring Marin on foot and then worked at REI during college where she started cycling. Paris is passionate about active transportation and public transportation and when she found out that there was a community organization focused on opening the Alto Tunnel she knew she had to get involved.

“I think the Alto Tunnel is needed so that people can move around Marin easily without needing a car. I want to bike to Donut Alley or walk to dinner in Larkspur. My partner wants to be able to bike to work in Corte Madera without needing to drive. Biking or walking over Camino Alto or Horse Hill is great when I want some exercise but it isn’t a good solution for most people, so longer-term I think that the tunnel will be great for improving transportation accessibility throughout our community.”